Alarmed by the scarcity of science programs for girls and the evidence of girls’ lagging science scores, City Parks Foundation created Green Girls in 2002 to focus on getting young women of color from under-resourced neighborhoods interested in science. A substantial gender gap exists in the science classroom: 2008 data from the National Assessment of Education Progress (NAEP) shows that, while boys and girls start out with equal levels of interest and engagement, by the time they reach age 10, boys score significantly better in math and science than girls; the 2007 Trends in International Mathematics and Science Study also shows that eighth-grade boys continue to outperform girls in all areas of science, and that students of color and those living in communities with higher poverty levels are most at risk for low science achievement. While the NAEP data recorded in 2015 shows a narrowing of the gender gap, the data still indicates a significant disparity in test scores between white students and African-American or Hispanic students. Further, the UNESCO Institute for Statistics estimates that “less than 30% of the world’s researchers are women” signaling that while the achievement gap is narrowing, the opportunity gap has not.

As the Green Girls program evolved, it became apparent that the students needed much more than just science instruction and activities to become engaged in our program. In the out-of-schooltime arena, girls need more than academics and we found early on that our students had issues with confidence and attitude toward science, as we often heard the refrain “I’m not good at science”. We needed to build confidence and a safe space before we could reach our goals in environmental science learning and advocacy. Green Girls became an after school club that integrated team building, socio-emotional learning and female empowerment. When these elements became part of the science-learning equation, we saw our students flourish in unexpected ways. They support one another, develop lasting friendships and show great ability to work together. 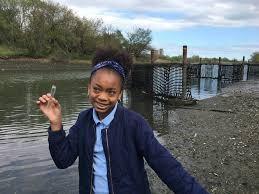